Moving from film to a virtual animated space, Alex Pearson is the driving force behind the unique, visually stunning and poignant VR project, Future Aleppo. By harnessing the power of immersive tech, he is making a tangible difference to Syrian refugee children.

When filmmaker Alex Pearson saw a Channel 4 news report on the story of Mohammed Kteish, a teenage syrian refugee, it inspired him to reach out to Mohammed and his family and triggered the start of a life-changing journey of discovery.

“They destroy. We rebuild”

Mohammed Kteish is the inspiration behind Future Aleppo. In September 2015, Waad Al Kateab’s Channel 4 news report focused on 13 year-old Mohammed at his home in Aleppo. He dreamed of becoming an architect, with the aspiration of helping to re-build Aleppo after the conflict ends. Reflecting his passion for building, he had created a 3D cardboard model city, mixing existing landmarks with small improvements, such as wider rail tracks to accommodate high speed trains; reflecting his idea of an ideal Aleppo.

But when he and his family were forced to flee their home to a refugee camp in Turkey, Mohammed had to leave behind his beloved model city. Having travelled to meet Mohammed and his family and witnessing him creating his 3D models, Alex developed the idea of helping to recreate Mohammed’s city digitally so that wherever he went, Mohammed could have his model with him at all times.

Creating a virtual world provided an ideal medium for the project. This was inspired after seeing Limar, Mohammed’s youngest sister, try VR for the first time and witnessing the powerful and positive impact it had on her. This reflected the hopes and dreams of Mohammed, the driving force behind the experience. “We wanted to do something that was about his work” explains Alex. “We wanted to show a story of hope, which is Mohammed personified.” 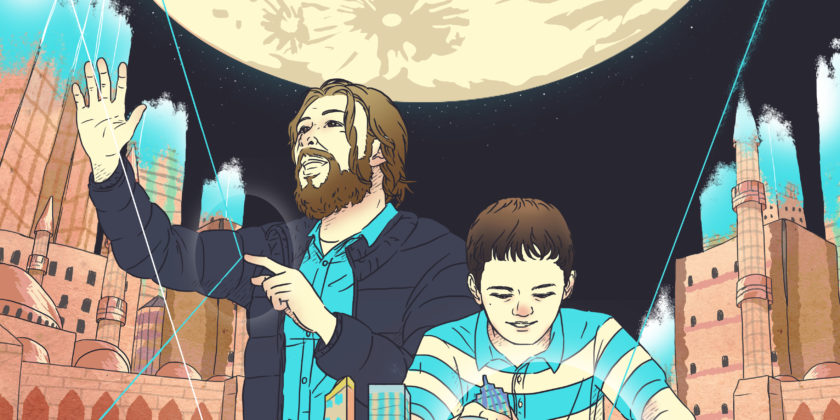 What is Future Aleppo?

Future Aleppo is an interactive, Unity built, animated VR experience. The participant gets to enter home city of Aleppo. Visually, the city and its buildings replicate the creative style of Mohammed’s physical 3D models. Mohammed is your guide throughout your virtual journey. As an active participant in the experience, you get the chance to walk around an unbuilt city scape that is littered with paper. By picking up pieces of paper, you get to make and throw paper aeroplanes, which when thrown at specific spaces then triggers a building to grow before your eyes. Each either reflects Mohammed’s memories of buildings in Aleppo, or a building that he has imagined will help to create his ideal version Aleppo. These are highlighted both visually and through stories told by Mohammed, or his family and friends who you meet along the way.

Beyond the VR experience, Alex realised the power that VR has in taking people out of their real-life situation, even just for a few minutes. This led him to develop the Future Aleppo workshops, giving children in the refugee camps the chance to use their imaginations to create and immerse themselves in their own worlds by using VR.  The workshops give the children the chance to escape reality temporarily by giving creating and experiencing their own content, as well as helping them to learn new technical skills.

The team work closely with children to help them to tell their own stories and get immersed into a world of their making, beyond the parameters of the refugee camp. “The children create it and we filter it through Unity” explains Alex. Mohammed plays a central role in all the workshops, either, from leading workshops in the camps, through to video linking in to workshops that are held in places he is unable to travel to. Alex is mindful of the sensitivities of working with children who have seen immeasurable horrors and each child is guided throughout the workshop to ensure it is a positive experience for them.  “We simply aim to give children a sense of their place in the world” explains Alex. “They have left everything behind through no choice, and for us to be able to say, ‘let’s build a world that’s yours’ is a powerful thing. We help them to create a safe space that can never be bombed; it’s preserved and there’s always a digital record of it that can be accessed at any time by every child.”

In contrast to the camps, the experiences created by the children are colourful and vivid. Some base their experiences on places from their memories, others focus on their imagined ideal spaces, such as green open space. “They get to illustrate their passion through building, that they can then share with their friends in VR. It’s quite a simple process, but it gives them a huge sense of importance.”

Funding was, and continues to be one of the biggest hurdles in completing the VR experience and supporting outreach work. “Winning the Sheffield Doc Fest Alternate Realities commission in 2017 was a big deal for us” explains Alex. “It gave us the funding and exposure to allow us to continue to work on the project and build the experience.” This has been coupled with funding and support from the Arts Council England, as well as donations from OFID and a private backer for the outreach workshops.

Ensuring that Mohammed and his family had continuing involvement in both the VR experience and the workshops was critical for Alex. As a refugee, Mohammed is severely restricted in where he can travel, so using video conferencing is crucial. Additionally, as the majority of the workshops are held in the refugee camps, Alex and members of the team have needed to travel to Turkey and into the camps.

UNHCR also offered help in terms of logistics, supporting the team to travel to/from Turkey and Alex is grateful that the Turkish Authorities were incredibly open minded and supportive in allowing the team into the country. That didn’t necessarily translate into easy journeys; given the nature of the subject matter, travelling with strange equipment, as well as cardboard models of a city meant that they were sometimes viewed with suspicion when travelling through Turkey.

Making sure the right team was in place was crucial to the development of the project. As with all VR projects, bringing together people with diverse skillsets was essential, however, as Future Aleppo tells such personal stories, Alex needed a team that weren’t just bringing skills to the project, but who fully understood and supported its ethos.

“The team are remarkable” notes Alex. “It’s been great working with people who are on the same wavelength to ensure that the project remains truthful to Mohammed’s story”. Bringing the experience and workshops to life was a collaborative experience with a team that includes Mohammed, his father Wael and mother Shahd, brothers Yusuf and Taim, and sisters Limar and Amir. Waad Al Kateab, who first broke the story and her husband, Hamza have continued to be involved, as well as Zahra Mackaoui as the project’s producer. As the creative technologist, Andy Overton’s animation skills were central in the development of the experience, as well as supporting the workshops with his creative and Unity skills. Anna Bertmark, an award-winning sound designer whose innovative approaches helped to incorporate binaural sound in the experience, in addition to being a big part of the success of the workshops. Finn McNicholas, the project’s composer “has created a score that completely swells my heart on hearing” says Alex. The future for Future Aleppo

“I want to keep going back, as Future Aleppo has given me a real sense of purpose” says Alex. “You can see the difference it makes to people, just for those few hours. Hopefully we’ll get to go back and do more workshops, we just need the funding to do it.” He notes that although currently the cost of hardware creates a barrier to entry, but believes that social VR could hold the key in the future. He can see the potential to create a Minecraft-style VR world, where children could create a building, snap it and access an inbuilt mobile app to stitch it and upload it to a server. This would open up the chance to bring together children from different refugee camps from around the world to hang out together in each other’s space.

Additionally, the workshop model has been franchised, with workshops running in diverse places from Sheffield to Stockholm, Vienna to the Yemen giving refugee children the chance to integrate with others to work on projects to build their ideal city. More workshops are planned for the future. “The hope is that we will combine all these child generated papercrafted cities as districts into a much larger ‘global city’. When we return to children in camps, they can see and experience this virtual world, but also be reminded that there are children in the world who haven’t forgotten them” notes Alex.

Alex’s ultimate goal has always been to help Mohammed to realise his dream of becoming an architect.

“Mohammed and his family are effectively my family and so it doesn’t feel like the story finishes until then” he explains. “Nobody wants to stay a refugee, but at the moment, there’s no way back…. But the hope is that there will come a time where he can return and rebuild, and that’s the point I’ll feel like we’re done.”